Posted on March 15, 2010 by rubberduckyblog
As I mentioned in the previous post we spent Thursday evening voluntering at the RV show for Manitoba Association of Campground and Interlake Tourism Association. Of course I took my camera with me so I could share some pics with you. Unfortunately we did not have as many people pass through the MACAP area as we maybe could have. There was some changes made during set up on Wednesday and we ended up on the main floor just inside the entrance. This did not turn out to be the best area since most people would just beeline up the escalator to get to the other floors. GNR brought a tent trailer to put in our area and Krevco brought a hot tub and some outdoor furniture. This was a help as it did draw some people into our area. We did manage to give out a few campground guides that evening and hopefully a lot more went out throughout the weekend. I heard a report that some of the dealers felt that this was the busiest Thursday they had seen in a while. I am quite sure that the weather was a big reason for that. I can tell that everyone is getting itchy to start camping.

Next we go to the Parks and Beaches area of the Manitoba Adventures display. We were volunteering for the Interlake Tourism Association and they had a big part  of setting up this area. This was a busy section of the show as you can tell there was lots of stuff to look at and they had some highland dancers stop by and put on a show while we were there. I heard a rumour that the Eriksdale Creamery Museum was going to be there churning some butter on Saturday. A big Kudos to Gail From ITA, Jacques from Oak Hammock and everyone else that helped to set things up because it was a great display.

The Marsh and Boardwalk area (note the Rubber Duckies)

This guy was just hanging out

Jacques from Oak Hammock Marsh was measuring people to let them know which birds had the same wingspan as they did.

Some of the local wildlife

The show wasn’t just all fun and games. We did some work too. After much examination of the hot tub that Krevco donated to the MACAP site we decided it was time to upgrade our rental hot tubs. 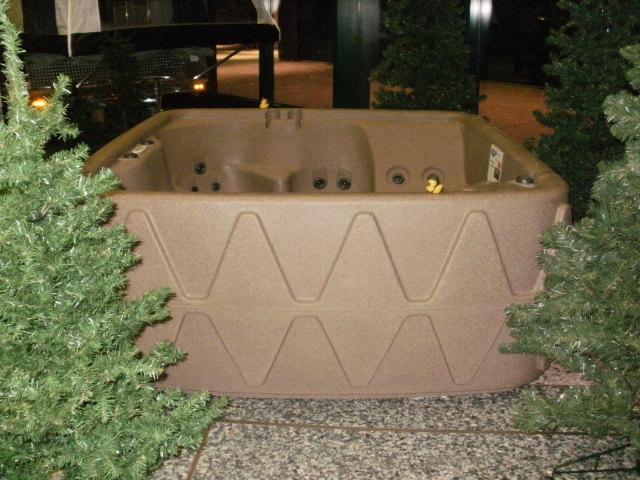 This entry was posted in travel. Bookmark the permalink.