Camping season has officially kicked off in Manitoba. Another May long is behind us and I think that we all survived. A couple more days and everyone will have caught up on their sleep and gotten the last of the alcohol out of their systems.

Our pig roast was a success this year, almost too much so since we had to stop selling tickets. It was very frustrating and disappointing to have to turn people away. We had planned for almost double the amount of people that we have ever had and it still wasn’t enough. I will have to tune up my psychic abilities so I can better predict the future next time.

Saturday was made pretty miserable by the wind. At least on Friday evening it had gone down and people were able to have a relaxing fire, but Saturday it just wouldn’t let up. At some points the dust was just unreal. Of course I did get some complaints about how windy it was in some of the open sites and I understand that. However, this was an unusually windy day even for Manitoba. I wish I could control the weather and I wish that I could make trees grow, but unfortunately I just don’t have that power in me. I also don’t sugar coat those sites, they are wide open and I tell it like it is and it shows it on my campground map. There will eventually be trees around there, but not right at the moment. There are many positives around the campground such as the pool, playground, activities etc; why do some people have to focus on the negatives. OK done my vent now time to move on.

My personal/marketing goal for the weekend for to get a good picture of a group around the campfire. Well it was my lucky night when Trevor pulled the guitar and I had the camera ready to go. 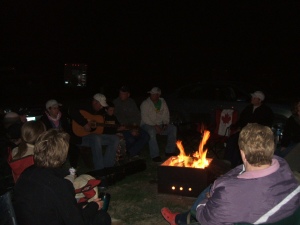 Sunday was a beautiful day for the middle of May. The pool was hopping all day. The kids were having a blast. I noticed one group of campers had organized a scavenger hunt for their kids. We were out for a walk in the afternoon and I came across a little toy pig on the mini golf and I started to pick it up wondering who had left it it there and then it donned on me what was going on. It was a great idea to keep the kids occupied for a little while they were busy running around finding things. The kiddie train was in high demand all weekend too. It never went out with empty cars and some kids would sit in their for almost half an hour to have a ride. Metro was almost trained out by the end of the weekend. Sunday evening was our movie night in the rec building. There was a decent turnout for both movies. First up was the Bee Movie. I would estimate about 12 people for that one. Next up was Mr Woodcock. There was probably about 12 people for that one too. The crowd definately switched though as the little kids cleared out and the bigger kids took over and a couple adults too. I wasn’t able to see much of this movie so I don’t know if it was any good or not, but everyone stuck around for the whole movie. I will take that as a sign that it was allright.

Monday was a pretty laid back day. It rained for most of the morning. Everyone cleared out fairly early except for the local gang who hung around for the day. It did clear up in the afternoon and was not too bad out. The rain didn’t keep the kids out of the pool however. Quite a few were able to get that one last swim in before it was time to go.

I think that we are finally all cleaned up from the weekend. We had to wait for the garbage truck to come this morning before we could put the last of the garbage in the dumpster. The rec building is switched over to meeting format for an ATV Club meeting tonight. I had two campers come in this afternoon. Coincidentally both from Alberta, but heading in opposite directions. One has been in Gimli and is heading home and the other is just arriving here. Time to gear up for another weekend which will be here before we know it.

This entry was posted in Uncategorized. Bookmark the permalink.